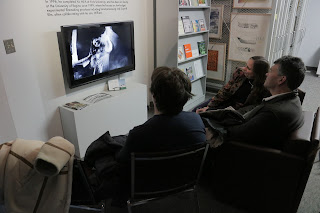 While there was no official opening or unveiling of "Eyes of Sorrow Moon" in the Mediatheque at the Dunlop, Friday night was the closest thing to it. The second day of this short German Expressionist style film that I just finished coincides with the opening exhibition of Aleesa Cohene and Benny Nemerofsky Ramsay's "So Far, It’s The Same Problem", so I was able to talk with many people, include Ed and Margaret whose daughter, Alice Willett, is William's co-star in the film. I received a lot of positive feedback. The monitor looks good and the image (but for a 3 frame error that no one else seems to have noticed) looks good in the space.  It will be playing continuously at the downtown main library until mid-January. With comfortable chairs and a running time of only 7 minutes, I hope lots of you can come and see it.
Posted by Gerald Saul at 11:03 PM