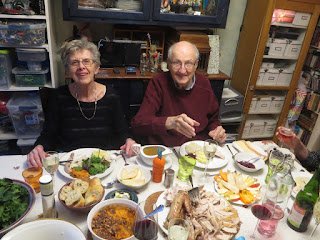 I used my new roaster for the first time, cooking an 18 lb turkey and having my parents over for a Thanksgiving dinner. We ate, felt great, watched some debate, felt unsettled but got over it. The earlier part of the day was mostly house cleaning and waiting for me film to re-render. It got stuck on the climactic effects scene which I had to go back to and do separately later. I think it was the machine's way of telling me that it was a terrible sequence. I showed it to William and he laughed and asked, "What is this? Reboot?". I need to redo this digital disaster with a practical explosion.
Posted by Gerald Saul at 9:23 PM