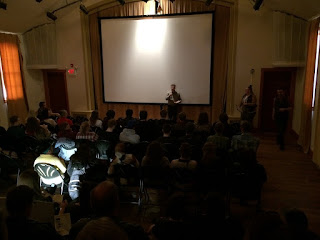 Congratulations to all the film students and their very successful screening of the work they created this year. The whole event on Friday night was great fun. A few things stood out of course. I've been looking forward to Matt Ripplinger's film for some time as he has been working away on the 16mm elements for it over the past few months in the darkroom. It was more sentimental than I expected, a nice surprise. Haley Klassen had two short animated films which, as seems to be her method, she reveals a lot about herself within them. Joel Campbell's film about a relationship involving long term pain and religion screened. However, instead of the script being presented as written, "Line: the movie that was never made" was a film about the (failed) film process emerged - a project that spoke to me much more deeply about the human condition than the intended story would have. A phoenix of a project. Beta Test by Kenton Evenson and Joel Makar was also quite sophisticated - a sort of black mirror sort of thing but had me really hungry for virtual pie.
Posted by Gerald Saul at 11:07 PM