I'm hitting that point in the year when I really want to do something creative but I have so many things weighing on my time that my attempts at embarking on projects is feeble and half-assed. For example, I shot a series of 80-90 second pin hole photo self portraits yesterday before leaving the office. I had commitments at home so I didn't develop them before I left. This morning I put them into the developer but found that they needed at least twice as much time in the exposure so they are no damn good. However, it had started snowing again this morning so the light was dim and I'd be back to square one at calculating the exposure (I was too busy/distracted yesterday to actually take a light meter reading) so I ended up with nothing and had to return to my grading instead of attempting new exposures. This is the best I came up with, but the original, which is what I'd hoped to show, looks so thin that you would not pay it a moment of attention. 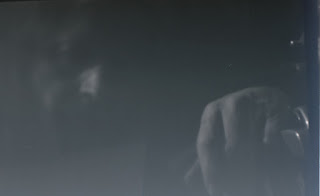 The best creativity this week was a solid hour that Allan, William and I spent writing out a scene by scene Pud film and graphic novel idea.
Posted by Gerald Saul at 4:44 PM