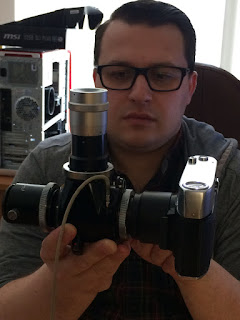 My time today was much freer than usual. The fire alarm that happened suddenly at mid-morning was only a minor inconvenience and gave me an excuse to visit Geremy and see his new (old) microscope/camera mount. Time went crazy after William got home. He fell behind on his daily comic pages so I set him up to work on one as soon as he got home, thinking he only had a bit of math to do later. The drawing took up all of his time until our early supper after which we went to piano and then to the screening of Stephan Broomer's "Potamkin" at the RPL. This event didn't have the usual promotion so only the true cinephiles where there: Jeannie Mah, Jason Britski, Ella Mikkola, Sandra Staples, Matt Ripplinger, and a dozen others. They were really in for a treat; the film was amazing. 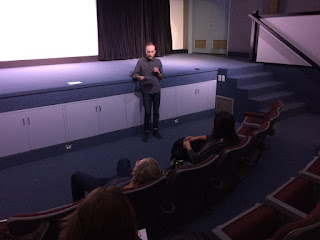 The heavily processed/reticulated/manipulated images, shown this evening with a 16mm print, were breathtaking by themselves. The soundtrack, which began as a loop of alarm-like droning noises, evolved into a sophisticated jazz composition of bells. I don't even know when it shifted from one to the other or whether I liked it more at the beginning or the end. I was just too captivated to analyze it. William thought that we should take a Batman feature (I suggest #4 with George Clooney) and transfer it to super-8, give it this same chemical treatment, then attach this soundtrack to it. In fact, I think he'd like us to do that with all films. Energized by the screening, we headed home to finish the drawing and get on to more homework. However, I've not discovered that he has to do a set of narrative images for Drama for tomorrow and he also has math homework. After cracking the whip on him all weekend, making him do homework all day Saturday and all day Sunday, I thought there would be a bit of a reprieve. I don't know what the teachers are thinking these days. 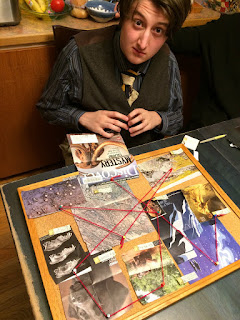