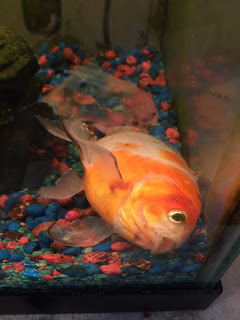 The really big goldfish we've had for five years died today. We've had it five years (minus a few days) and had named it Gilligan according to my notes, but we'd long since forgotten its name. It seemed well until this morning when I discovered it lying on the bottom gasping for breath. I tried a couple things from the internet (adding bit of salt, trying to feed it a cooked pea) but it just got weaker and weaker until it died in the afternoon. We buried it in a sharpie box. Sylvie came to help bury it, pawing some dirt on top of it and leaving it a bit of a gift until we covered over the hole.
Posted by Gerald Saul at 9:56 AM