We drove up to Saskatoon for the Friday night performance of Hamlet at the Shakespeare on the Saskatchewan festival. At the gates we were informed that the play was canceled due to the heat. We were carrying big bags of ice in anticipation of the grueling 38 degree weather so we were not too surprised. Went out to eat with Mike, followed by ice cream at the understated "Fable" ice cream stand, then watched tv at the hotel. 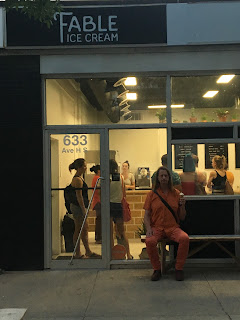