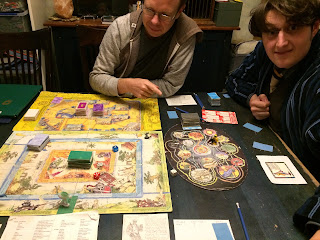 Years ago, when Allan Dotson was finishing high school, he was playing a game called Talisman and decided it could use some upgrades. He fashioned about 1000 extra cards for it over a span of time. In the end, he realized that this time could be better spend creating a game of his own that he could then distribute or even sell. Regardless, this was his first real foray into game design and we played it this evening. While we hit an occasional hiccup, it was really fun and entertaining. We played until midnight, even though Margaret was tired at the start and we thought she'd likely not play at all. It was ever-changing, clever, and kooky. We'll play again some time that we can play even later into the night.
Posted by Gerald Saul at 5:23 PM