Trials and Tribulations of Sweets

This morning at breakfast as I was eating the fifth of six cinnamon buns that Margaret bought for me last week (they are best after a few days as the glaze begins to crystallize), I kept getting a whiff of something "funky". At first I thought it might be the coffee cream, but that seemed fine. Next I thought it might be the cereal milk, and then the butter, but no on both accounts. Suddenly it dawned on me as I began reaching the moister inner layers of the cinnamon bun that it had begun to ferment. Ugh. 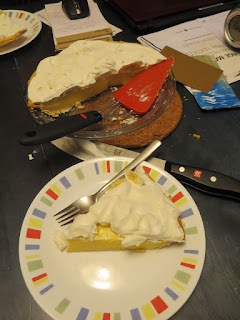 This evening Margaret made her first even banana cream pie. This is one of my favorites. It turned out perfectly. Yum.
Posted by Gerald Saul at 6:39 PM