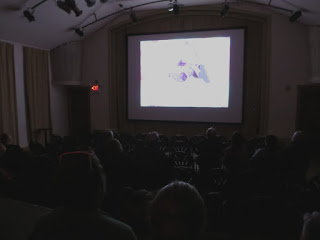 My film "Son of Cthulhu" that I finished in 1991 (although I did most of the work in 1986-1988) screened for the first time in a few years at the Artesian for the 24th annual Filmpool screening event (Screening Under the Steeple, previously the Screening Under the Stars). It has one of my more grating souindtracks that I'd probably have stripped off of it by now except that John McCullough once told me how much he liked that soundtrack (I'd lent him a 16mm print years ago and he watched it a few times at night on a particularly hot Toronto summer).
Posted by Gerald Saul at 11:28 PM