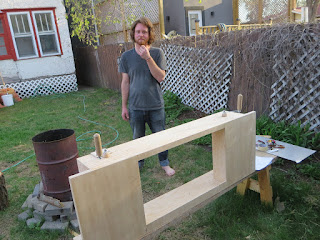 This morning we photographed a large number of items for my summer exhibition. One item not included was the panorama stage that I'm hoping to use to reconstruct one of my films (appropriately my postmodern feature "Life is Like Lint"). The wooden structure is just completed today (THANK YOU FRANZ) but the next step, creation of backgrounds that will re contextualize the story, is up to me. 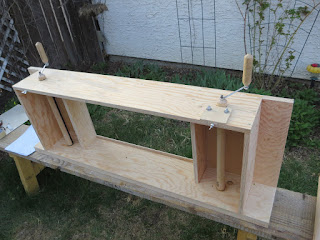 William and I attended Hitchhiker's Improv for the first time this evening. It is much different from Combat Improv. Not only is the cast much larger (I counted 18!), but the approach is much more tv variety show. They referenced SNL many times, not only through the music but through the inclusion of individual introductions, and MC, a newscast, a mixture of stand up, improv and sketches, and a host. There was something for everyone. The house was full. In fact, unlike most comedy shows I've been at, there were more people after the intermission than before it. 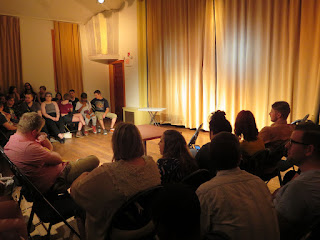