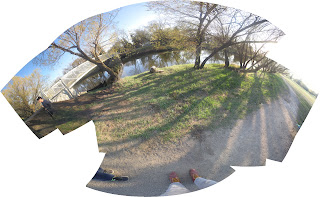 Within a two hour span this morning I booked three performers, none of whom I've ever directly spoken to, to work with me on a two tiered super-8 film later this week. I also re cut the pieces for my stereoscopic viewer, having broken my last one. Later William and I scouted locations and I think this area near the bridge might be promising.
Posted by Gerald Saul at 11:55 PM