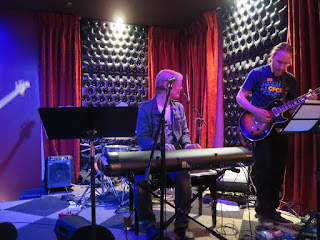 Jonathan Dyck, whom I've known since the 25 short films recordings in 1998, and who is William's piano teacher, leads a four piece jazz trio who played at the Capital this evening. We've never managed to get to one of these performances before. Margaret called ahead and was told, as we'd expected, that it is 19 and over after 8:00, which is when the music starts. However, if we made 7:30 reservations to come and eat, then we'd not be kicked out right away. As a result, we had a nice meal and heard some crazy guitar/piano/drum jazz. Other than it being the loudest music William has thus far be subjected to (we were at the front table), it was very groovy.