recovery and the problems with rooms 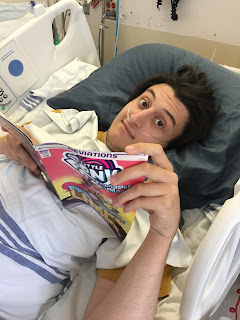 On Monday and Tuesday, William stayed in "Observation", which has six beds and extra nurses to respond quickly to each patient. It can get loud and doesn't give anyone much space, but the care was good. On Wednesday night he was moved to a smaller room with only two other patients. However, even though they were likely very nice people, they had multiple visitors all day long and their cell phone rings were ungodly loud. It made it impossible to even think let alone rest. When the doctor came to see William, she had a difficult time hearing or being heard. I think she said a few words about him needing better rest than that to be able to be prepared for his second surgery. On Thursday he was moved to a private room. Much better. Decorated it with a few photocopies from My Little Pony.