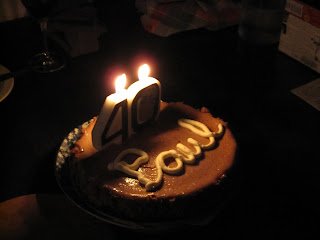 Paul's birthday was on the weekend. I had lots of family in town and so did he so it took until today to make a cake. I used my new icing bag and nozzle to write with whipped cream on top, this is my first successful attempt at cake writing. With whipped cream it was quite easy. The cake was chocolate cheesecake, one of the better ones recently, probably due to the simplicity. We played some Lego Minotaur and some Munchkin after supper then watched the pilot episode of Caprica that came out a few months before the new series. Neither Paul nor I had seen it. It was okay but not as interesting as the show seemed to be.
Posted by Gerald Saul at 11:49 PM