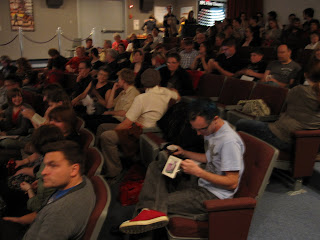 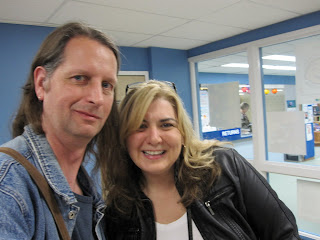 This evening was the tenth annual One Take Super 8 Event. Good crowd, mostly good films. It is interesting to note that some films felt short and others felt long even though they were all the exact same length. Who invented this reality thing because it seems so screwed up. Berny Hi (in audience to right of frame reading his program) made a film about his cat was one that Margaret and I were talking about on the way home that we felt we'd like to have heard more and had it go on longer. Charming and beautiful even though I didn't quite understand what he was cooking or how he got an ear infection. My film and William's film turned out well. There were a few who suggested that I "cheated" although no one presented me with a rule book governing the event. Dianne Ouellette, pictured above, also had a new film about the end of her relationship with a tall guy who's name happened to be Gerald. It might be time for me to write about Dianne again, haven't discussed her films in two or three years.
Posted by Gerald Saul at 10:45 PM