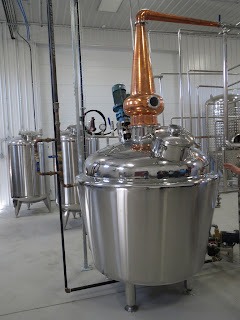 I took a tour of the Last Mountain distillery in Lumsden today. They had a grand opening of their new, and vastly expanded, facility. The still is huge and shiny and described (appropriately) on the radio as steampunk-like. I wanted William to be able to see it but they could only let him look at it for a moment through the open door as you had to be 19 to go on the tour.  I bet there was a work-around for this but they are new and don't want to be taking legal risks. In fact, most of the tour was a discussion of liquor taxes and how they have limits on how they distribute if they want to avoid the high liquor taxes.
Posted by Gerald Saul at 5:29 PM