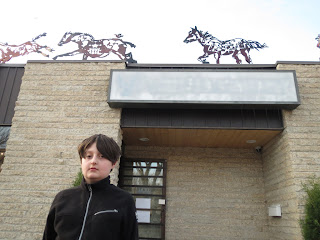 Slate Gallery, over near the General Hospital, had its second exhibition open last night. Good crowd but nothing compared to last month's mob. Talked with Jack Cowin for a few minutes. I liked an etching he did of a rumpled sparrow and William wanted to know if the sparrow's name was Jack, as vaguely suggested on the title card and if so, was it a pirate? (No, Jack had not thought of that).
Posted by Gerald Saul at 5:56 AM