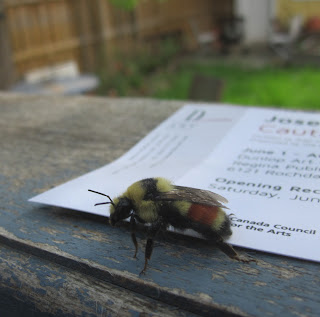 We've found a total of three live bumblebees in our basement this week. Margaret found the second and when I went downstairs to try to figure out how it got in, I found a third. Unlike the first which stung Margaret as she was turning on the washing machine (which it died inside of) the second and third were captured and released. We are now thinking that our damaged back screen door is the culprit.
Posted by Gerald Saul at 9:27 PM