Last summer when Geremy and I were talking about the camera obscura, I became aware of, and interested in, the "camera lucida" which is not a camera but rather is an optical device involving a prism which allows  you to trace an image from a live subject, literally seeing the image superimposed on the paper. One book suggested that these were made until recently and could be found in art supply shops. In fact, they have not been made since the 1920s and were fairly difficult to find and increasingly expensive. However, when I was searching on line I found a group who were redesigning them with improvements and calling it the Neolucida and fundraising through Kickstarter. They were ridiculously over-subscribed and it was actually difficult to even buy into them, even though there was still a week left in their fundrasing. I bought one of the last available units. It arrived yesterday and I did some playing with it. As with all my toys, I'm certain I could do better if I could relax and spend some time with it, but here is what I could draw in about five minutes: 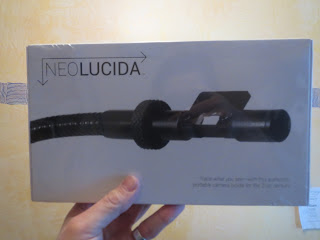