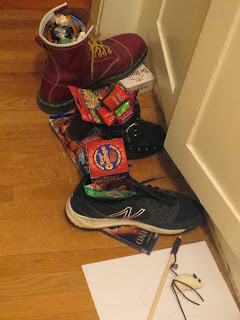 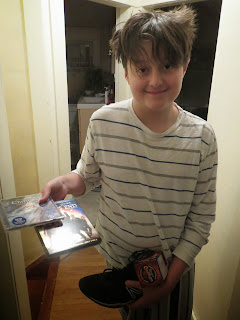 It is a snack-full day. We begun with many surprises in our shoes left there in the dark of the night by Saint Nicholas. We each got some Lego (I got the cheerleader, whom I will save) except for Sylvie who only got a stick and toy mouse. We also each got candy and other cool stuff.
We had a potluck lunch at work to which I brought cookies.
I went out to he Mercury for supper and connected with Jason Britski to talk about a screening of his films, probably in March. We had some lemon pie.
At home, for French Friday, I showed "All the Boys Are Called Patrick" by Jean Luc Goddard on 16mm in the living room. I was too full to each more snacks by that time. This is the first time William has seen it, even though he performed the Patrick role in my film "All the Boys Are Called William" three years ago.
Posted by Gerald Saul at 10:26 PM