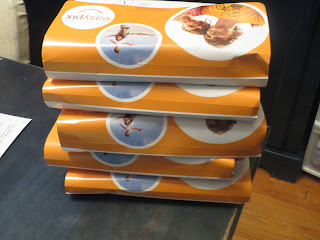 While most of my key photo events are posted in this blog, we still maintain a printed photo album. Good for occasional conversations where hovering around a computer screen is gouache. I printed over 600 images, some as doubles to give away, and today had to sort them to prepare to put them in the albums. The lab always scrambles them up a bit. William finished school today so I took a break from baking to lounge in front of the tv with him. I sorted photos during "Nightmare Before Christmas" which he never liked until today (they watched some of it in school and he discovered it isn't as horrible as he remembered). Made sure to study the credits carefully and find Chrystene's name (and I had a photo of her in my stacks). We also watched the surreal French film "City of Lost Children" which was incredible. We laughed hard and often.
Posted by Gerald Saul at 10:39 PM