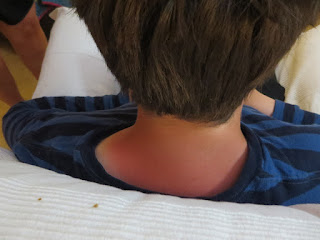 In my day (yes, I do sound like an old man) we were in the sun so much that everyone got sunburns regularly. As I got to high school, I tried to avoid getting burnt but managed to get one almost every year until I was 20. Things are different now. William has sunscreen slathered on him from May until October. He has never had skin peel from the damage of the sun. Today he was on a school outing which, unknown to us, took place mostly outside. It appears he has his first sunburn. An hour after he got home, he asked me if there was something wrong with his face. He could feel and see that his nose and cheeks were red (but not burned). The back of his neck, however, is red and turns white when touched.  It is a classic burn; minor and likely won't peel (unless Margaret finds some aloe vera gel; that stuff always makes things worse).
Posted by Gerald Saul at 11:42 PM