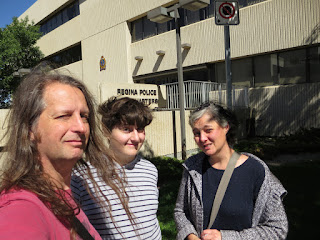 Later in the afternoon we dropped off stuff at the police station. A few weeks ago the car that Margaret's mother gave to her last year, her 1990 Dodge Spirit which was stolen last year but found by neighbour Steve and repaired without insurance claim, was stolen a second time. This time it was the police who found it and had it towed to SGI where, naturally, the cost of ruined tires and window and steering column were beyond the list price of the car. A couple of days ago Margaret's mother went and got the contents of the car which included a number of library cards and a zippered book bag with reading glasses and two expensive new text books on social justice. As these items didn't belong to us and could also be identified, we turned them over to the police.
Posted by Gerald Saul at 7:52 PM