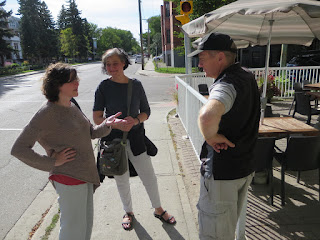 I had coffee with Leslea and Leif today. William, Teagan, and Kiki were also along but we sent them to indulge at the candy store and make their own way home so that we could talk about them (or so I told I told them as the reality was far more mundane). Tomorrow William starts high school. Teagan and Kiki, living in Winnipeg and Toronto respectively, don't start until next week. George was over for supper and we looked up Kiki's high school schedule and found that she gets out for Christmas two days before William, so I'm not sure where (or even if) the two school years balance out.
Posted by Gerald Saul at 11:58 PM