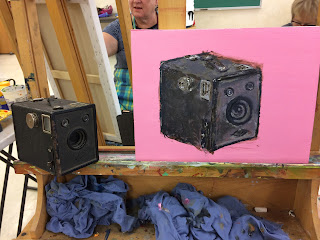 I had a meeting (video conference) at 9 am so ended up at painting late, so brought my second of the old Brownies to paint as they are relativity minimal. I got a bit "painterly" with it, leaving in more strokes and signs of the brush. Had fun.

After the faculty meeting, I went for a drink with the department. A few people are away already, but we still had a fine group and talked about movies and Hamlet and old cameras. I had noticed that the Brownie from earlier still had a roll of film in it and I thought it might be a fun addition to my sabbatical to try to use more of the cameras that I have in my collection that I've never used before.
They gave me an amazing Vic Chicansky sculpture. I've totally flummoxed by it. 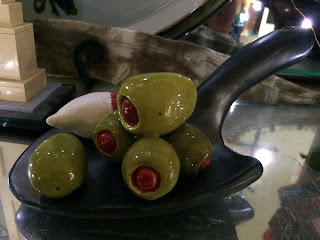 The Art Gallery of Regina had its AGM and its first opening in the partially renovated space. Gabriela Garcia-Luna's solo show is quite beautiful and she spoke eloquently about the environment and how the images came to be.