Lifelong learning with a white suit 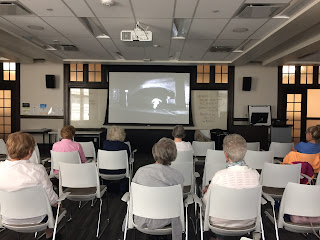 I began my four film course with Lifelong Learning with Alec Guiness's "The Man in the White Suit". The talks are not very long. I gave some basic bio of him and the director (whom I discovered later became the dean in the film department at Calarts where I believe Szymon studied). The critical parts I presented was a bit about the boffin and issues of changing masculinity after the war. The group are friendly and I like presenting to them. I got there early to learn my way around the newly renovated space. Very nice.
Posted by Gerald Saul at 8:46 PM