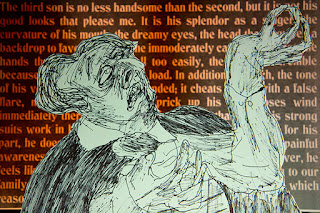 William started studying Hamlet in school. He was forced to sign a promise not to spoil the ending (something I don't think anyone has insisted on doing for Endgame) because no one in his advanced English course knows the ending of the play. No one.
He's reading Claudius, the true hero of the story. We watched most of the 2009 film version with David Tennant and Patrick Steward (reprising his Claudius role after his amazing 1979 version).
I went to Riley's printing (previously "Mondrians:) and got 13.33" x 20" prints of William's AP art series made for his pop up gallery exhibit next week. Watch for it.
Posted by Gerald Saul at 11:30 PM