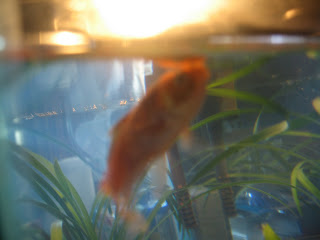 We all went to Moose Jaw this afternoon and to the Sukanen Village. The kids had a good time running around seeing stuff and bonding. When we got home, Big Gil, William's goldfish who had seemed to be recovering with the new medicine over the past few days, was in trouble. He'd been swimming around a lot but he'd not been eating and he was obviously a bit weak. He had been swimming through the plant a lot, it was basically a spider plant, and sometimes he'd almost get stuck due to his lack of energy in his swimming. Well today when we arrived he appeared to be caught by the intake on the water filter. Perhaps it was only for that moment or perhaps it was longer. When we moved it and he was free, he swam a bit but started spending more time on the bottom. A few hours later I came to see him and he was mostly on his back, breathing only sporadically. I sat and watched him die over the next ten minutes.
Posted by Gerald Saul at 10:51 PM