The two new goldfish, Silvy and Racer, were dead in the tank this morning. William was more upset this time, probably because he saw them and was there when we fished them out. We spent over an hour emptying the tank, cleaning everything, boiling the gravel, and reassembling the whole station. The catfish is still fine although he was pretty freaked out by his container during all this. Margaret went to the pet store and was told that these small goldfish are prone to sudden death and that there was likely nothing much wrong with our tank. Anyway, they do say we should let the tank settle for ten days before we put new goldfish in. 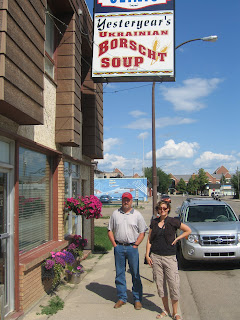 Margaret's brother and his daughters headed back to Toronto this afternoon. It finally turned hot today, 31 degrees, so we played with the hose all evening then went inside and watch "Ernest Goes to Africa". My nephew Chris loved Ernest movies when he was 7 or 8. William howled during many scenes too.
Posted by Gerald Saul at 11:17 PM