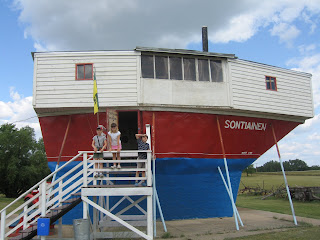 I am starting to get back on track with my projects. I think it takes the completion of some important tasks for me to start feeling positive about what I'm doing. For example, today I had the music from yesterday under my belt and was able to start laying it out with the picture and suddenly I'm able to imagine finishing the project (Modern) rather than it being another albatross around my neck. As well, I think the long End of Life documentary is a step closer; I reviewed a work in progress today and it is able to go to it's next step (audio correction and sweetening). Next Tuesday we record again and I should also be able to get some incidental music for "Grain" recorded and be able to complete that film. On top of all that, I went out and had a wonderful time with William this evening, walking as he rode his bike. We dropped off William's old Dash (from the Incredibles) jacket for Gavin's son Jack. Jack burst into tears when confronted by me and his dad trying to put a jacket on him; completely inconsolable. I figure Jack must have thought the jacket was to correspond to leaving and that he didn't want to leave, especially with a stranger. Or perhaps he's just not as into the Incredibles as we'd be led to believe.
Posted by Gerald Saul at 9:13 PM