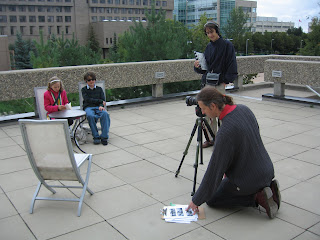 Last night the power in our house went out for an hour from 10-11 and again a few minutes later for an hour and a half. It rained all night and was forecast for rain all day today. I took a chance and continued on my scheduled film shoot and got very lucky. Not a spot of rain from noon until four, allowing me to shoot both my Godard film and my One Take Super 8 film. Erik was a real trooper, thanks. Here we are shooting with Teagan and William using the Canon 5D and recording with the Ederol.
Posted by Gerald Saul at 11:14 PM

hey, i recognize that shot. is she supposed to be reading and ignoring a Patrick?
cheers!