Settlers of Catan with Frenemies 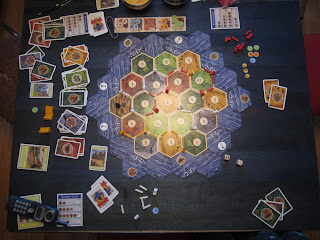 This afternoon I took a break from the reports I was writing to play a short game of Settlers of Catan. We added in the new Frenemies expansion but just played with the three of us and the basic beginner layout (to remember how to play). It was quite fun. It reduced the feelings of being constantly either victimized by other players or guilty of mean spirited playing when the bandit is moved. Instead, the non-aggressive choices come with benefits and therefore the game is more about competing to expand rather than the bickering and attacking.  William won, even though I was actually trying to beat him. Great job. We took a break from the game so he could go bowling with Teagan and Griffin and he won doing that as well.
Posted by Gerald Saul at 3:17 PM