Met with Rob today to see his photographs he's been creating over the past couple of months. Nice large prints. Geremy Lague is back in town and he did his end of term crit. Some funny sidebars slipped in via his Presi-based presentation. I worked on Sockvile at home, based on an SD output I created this morning and put together a rough soundtrack. I called Frame Discreet and it looks like I won't be able to get my film back until after New Years, meaning I won't be able to edit my project for the MacKenzie show until then. This makes me pretty nervous, but there's not much I can do. I baked some sugar cookies that mom made the batter for. Still a few more  work related things to do tomorrow but it looks like I will be able to ramp up my baking and Christmas card production pretty soon. Here is a fragment of what Margaret has been painting for one of our cards. I'm hoping they will reproduce well enough that we can send out more than three cards (which is how many we have right now). Looks awesome: 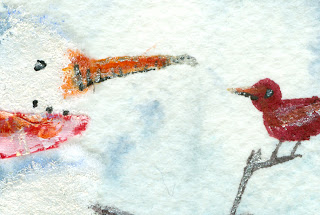