I posted the nutty "Wate-One" image yesterday on an impulse without even doing a web search on "Wate-On", but just did so and found a couple of other sites which also uploaded ads for humorous content (note: later versions than the one I did: 1971, 1973) but I also just found that it is still marketed today! However, it does not appear to be a steroid as I suggested, but rather just a multivitamin with sugar and flavor. 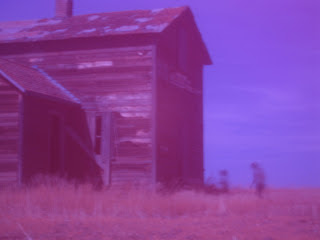 We went to the farm today. I shot a bunch of time laps, time exposure sequences including one around an abandoned house on Margaret's mother's land that we described to William as the "Ghost House", and continued calling it that the rest of the day. I think one idea is starting to come together for "Grain", the use of the long exposures will either erase moving people, or make them ghost-like. I'll try to weave the sequences in this style together into one of the ten minute films as an exploration of the lost past. My form and content are coming together with what I want to make, this is an important step in my process.
Posted by Gerald Saul at 9:39 PM