I am finally ramping up my shooting of my film, especially now that I've figured out the "ghost" motif that of the four "Grain" films will revolve around. However, I'll need to return the camera in a few days and have a few non-film commitments before then, so I'm worried that this small amount of momentum will be lost. Today I shot construction workers on the condos near our house as well as others building the new bus depot. 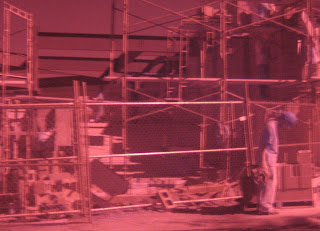 It was a gallery hopping evening, September is quite the season for that. We started off with a talk at the north branch of the Dunlop with Darlene Wight from Winnipeg contextualizing Inuit art. It was rather condensed but she brought some humour and life to the images. It's great to hear from a scholar who really seems to love and care about the art work. This is apparently the first Inuit show EVER for the Dunlop!

Next we went to Mysteria where a group show opened. Lots of familiar faces including Misty Wensel with her new baby. Misty is a dancer and has a studio where William took a few classes. She and William performed in a garden together years ago, he loves her (but didn't really love taking classes). The show included works from Chad Jacklin, Marlo V, Lynn Cecil, Brad Kreutzer, Theresa Kutarna, and Melonie Rose. I liked Marlo's internal organs made out of felt, but wished she'd done the colon - always my favorite.

Third was the MacKenzie Art Gallery and a show of work by Ron Bloore. My mind was rather full of art by that time so I have to admit that I didn't really spend much time looking at these large paintings but instead talked about Flintstones and Birdman with Mark Wihak who is fresh back from Montreal where he premiered his new film "River".
Posted by Gerald Saul at 12:13 AM