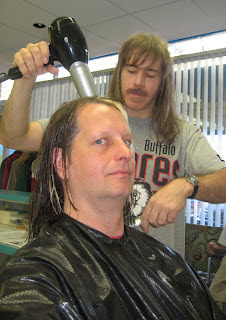 Got a haircut today, Margaret thinks its shorter than usual but since I only get around to it very 9 months, one must be extreme.
The 50-104 Festival began, I screened three films from my "Mr. Saul's Utopia" series to a small crowd at the Museum. They repeat tomorrow at 9pm. Other films I saw tonight that impressed me included Jason Britski's even more formal than usual two new pieces, and a really wonderful silent film of the Niagara Falls by John Price "View of the Falls from the Canadian Side". It was a generally odd bunch of films, perhaps because of the high number of works from artists or at least from people coming out of visual arts and/or design background/training. 4.5 hours was a bit of a stretch, but enjoyable. The only food available was popcorn however, and as I can no longer eat that, it's lucky I snuck in a peanut butter cup.
Posted by Gerald Saul at 12:22 AM