Yesterday I took William to a birthday party and then later to the Filmpool event (I've not seen any replies to the trivia yet) but also really needed footage of the harvest on Margaret's family farm that I didn't think would be happening until later due to the rain, so I was without any 16mm cameras and was going to shoot some super-8 then optically print to 16mm for one of the four "Grain" films, so I workshopped Margaret on the super-8 camera and she went and shot three rolls for me, a new chapter in our collaborations. I can't wait to see the footage. 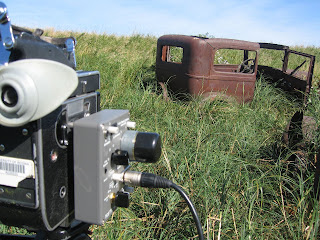 I'm looking through a number of old film programs and am feeling a bit annoyed about the length of some people's bios that they have submitted for publication (these are most often written by the person it is about due to frequent shortfalls in time by the short staffed organizations planning art events.) There is inevitably one or two overly long bios that strike me as being done by tremendously ill informed individuals or by ones who overcompensating for something. I think they should contain the sort of information you might tell someone whom you've just met who asks "what do you do?" or something like that. When I see someone listing awards from three years ago or a job history beyond the current job, I have to think that this is someone I don't want to get cornered in a kitchen party by.
Posted by Gerald Saul at 9:22 PM