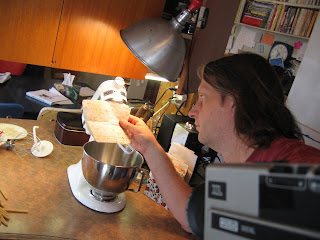 This morning I shot my One Take Super-8 film, or at least most of it. I'll have to conclude it tomorrow morning when I have some fresh cream and good light. I'm still looking for the perfect counter point soundtrack, have a week to put that together.

I finished watching Jason Britski's films today. The last two were both screened at the 50-104 festival but the second viewing brought an entirely different tone to them. When I first saw them a few weeks ago I thought they were entirely formal, I thought that he was distancing himself from content. One is primarily about China Girls, the momentary flash of an image of a woman that is put onto the opening leader of movie film to assist in colour correction. The second was about power lines. This time watching them I think they are highly sentimental, being about his long time passions for film and for looking up at the sky. What will a third viewing bring...?
Posted by Gerald Saul at 9:28 PM