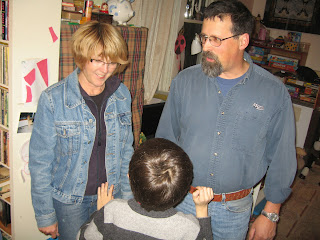 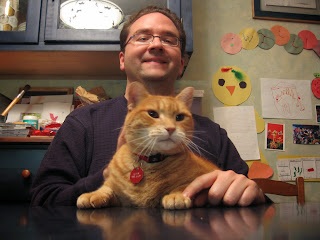 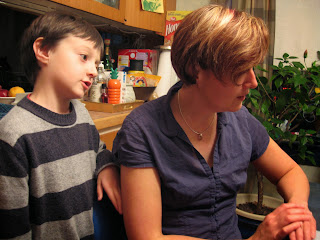 Today is Margaret's birthday. She's decided everything should be based around the number 3, which has me somewhat baffled. It's not that I don't work well with arbitrary themes, it's only a problem when that theme is so general that I don't know where to start. It's like saying that the birthday should have a birthday theme. I picked up an amazing New Yorker cartoon collection. If the hefty 600 page book isn't enough, it also has a dvd rom which contains all 70, 363 cartoons on it! That would be reading one a day for about 200 years, or 200 a day for a whole year. Fits well into her cartoon collection which has been sealed in the attic for a year until last night after we watched the Adam's Family with William and I had to go find the Chas Adams collection from storage.

William and I had our doctors appointment today, so I took him downtown to the SGI tower for lunch. They were serving macaroni and cheese as well as ribs. William was excited about the macaroni until about 5 seconds after I'd been served, so he mostly ate my lunch and I ate his. Fortunately he said something before we'd put some horrid ketchup onto it, he follows his mother in being able to tolerate this mixture, I can't. We are in good shape, William surprised the doctor by reading words off the poster he pointed at, rather than just the letters while testing his eyes. His reading is coming along quite well. I found out from my appointment that I'm actually an inch taller than I thought I was. I double checked with my own marking on the wall that I drew a few years ago and it's true. I marked it but never measured it, who knew?

I finished shooting my One Take Super-8 film today and ate the results with Gerri Anne, Steve, and Paul. Steve made his first video last weekend, "Going for Milk", although it perhaps should have been called "Milk Run" about getting distracted by the hot car while using it for an errand. Pretty well done, especially for a first work. Only about a couple of minutes long.
Posted by Gerald Saul at 10:23 PM