Yesterday, before I met with Eric, I shot a minute of video of Tyler Banadyga (whom i mentioned in this blog a few months ago as having made a feature length super-8 movie). The purpose of my video is to create a response to pop art, in particular of Andy Warhol's silkscreens, for my "Modern" series. I have made four versions of this with Tyler now. The next step will be to kinescope it to 16mm film and hand process it. Eric is going to help me set up some musical performances for the film project. I'll let you know when that is happening, hopefully in February. Here is a still from what I've done with Tyler. Tomorrow I might work on the minute I shot of Eric. 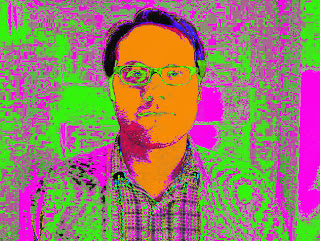 And speaking of low budget movies, I just watched "Razor Blade Smile", an ultra low budget British vampire movie from 1999. Kevin lent me this beauty, he thought of me when he saw a credit for donated film stock. There is a one hour documentary on the disc that has higher production values, or at least better performances, than the feature. The parts I liked were scenes with the main vampire wandering around the city or sitting on the subway. They used a lot of time lapse and long exposures and interesting angles, creative and beautiful. However, as an action film (she is an assassin as well as being a nymphomaniac vampire) it rarely comes close to working. The action is shot and edited poorly, but not nearly as painfully as when the actors try to talk. The performances all seem like they are in a porn movie (which is sort of is), delivering contrived lines out of context, badly recorded, with no emotion or skill. The ending surprised me (as I had stopped expecting anything from it by that point) as they reveal that the two vampires are really lovers and the entire plot was just the culmination of a 50 year game. Sorry to spoil it, but your really shouldn't watch it.
Posted by Gerald Saul at 12:13 AM