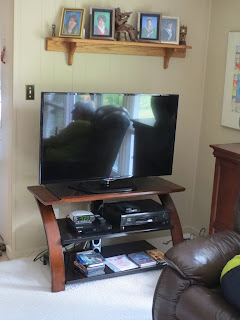 I did some shopping and errands today, including paying our unbelievably high credit card bill, and was home in mid afternoon waiting for my brother in law to pick me and the new tv up when I heard a storm hitting. I raced downstairs and grabbed up all the cushions off the chairs outside and was returning upstairs when I noticed the floor at the top of the stairs was wet. I could tell that the wind was blowing in through this norther facing window, but didn't think that much had come through it. Suddenly I started getting water on the back of my neck and I finally realized that water was coming from the ceiling. I zipped upstairs and discovered that the north attic window was open to the storm and the futons were soaked and the floor was covered with water, the same water which was now dripping through to the lover level. Ugg.
Eventually Al came (having been delayed by the storm in other ways) and we surprised my parents with the tv and set it up. Mom and dad were both happy with it, saying that they had wanted to get a  new set for some time. 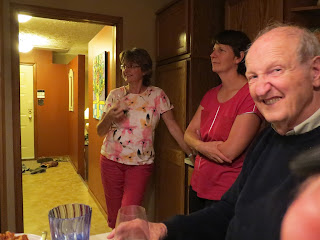 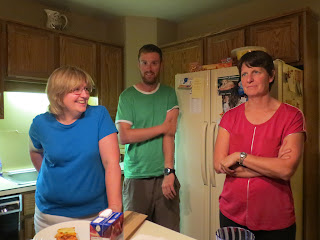 This evening, my other sisters arrived in town and we had a nice party at Lori's house.