We really got into the rhythm of touristing today. While I still feel uneasy driving the van, I have managed to get it many places around town including the hospital parkade where we connected to the tram which carries people up over the city tot he hospital at the top of the ridge, and into downtown where we met up with Thomas and ate Indian food at the food carts (wow, was it spicy and so so good!), and into Chinatown where we unsuccessfully hunted for plates but did find the "Keep Portland Weird" sign featured in "Portlandia", which is across the street from Voodoo Donuts, reputed to be the best donuts in town but had too long of a line up so we didn't go. We had to get back together with Veronica at Powel's books, a gigantic new and used book store which has expanded numerous times until now it takes up an entire city block, about three stories high, in a labyrinth of stacks. I slipped out of the bookstore for a short while to go to the Dr. Martin store across the street and buy new boots for fall. Somehow, even after doing what I would usually consider too many things for one day, we got home and played a round of "Seven Wonders". 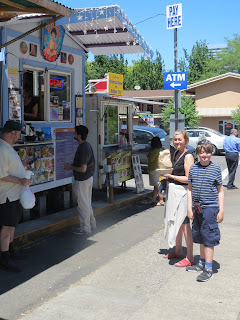 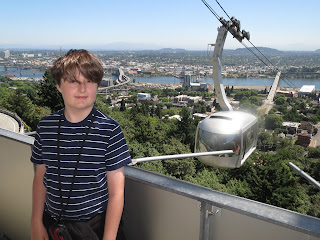