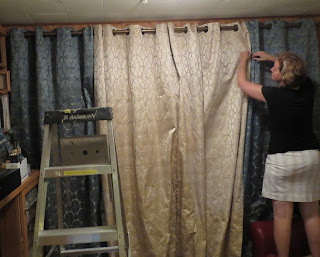 Margaret found a sale on black-out curtains today and we redid the front tv room with them. Still a bit undecided about colour. Also, the look from the outside is a bit of an issue which may require another layer to resolve.
I took William and Griffin to "Man of Steel" today. For the most part I liked the re-interpretation of the story, although I was amazed by the amount of damage to the city in the final scene. The online analysis brings in the damage to Metropolis at 2 trillion dollars, about 10 times the damage to New York in the Avengers film.
Posted by Gerald Saul at 11:30 PM