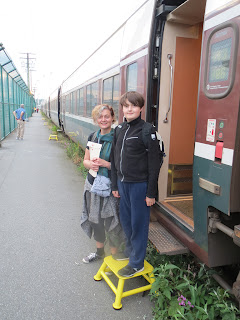 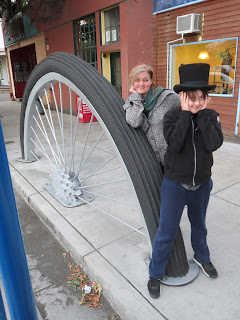 Very early this morning we boarded the Amtrack train in Vancouver and headed south. After clearing customs, the ride was entirely pleasant. We had regular fairs to Seattle but after than had managed to upgrade to business class (giving us bigger seats and other bonuses such as free baggage storage at stations). We had a three hour stopover in Seattle which allowed us to disembark and walk around parts of the downtown. At a vintage store, William found a well priced top hat to replace his costume grade mass produced one he's worn previously. We arrived at Eugene Oregon near sunset and were picked up by our friend Thomas Phinney who'd had some time to re-jig our vague travel plans and book a great deal on a rental car for us. When we arrived at Enterprise, the mid-size car was unavailable so, for the same price and for the second time in our family travels, we were upgraded to a mini-van for the week. We now sit seven! The drive on scenic roads to Thomas's family cottage was in the dark so not so scenic (no photos of journey available).