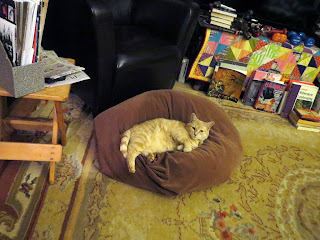 At 7:30 this evening we got a call from George on his way in from the farm wanting to know what time Percy Jackson and the Sea of Monsters would be on (it opened in theatres today). He'd told the girls he'd take them but the only other show for the day was at 9:50. We all went. While I didn't fall asleep during it, this was more due to having a restful day than for the engaging nature of the film. While the production was generally well crafted, I couldn't figure out what was more mediocre, the writing of the dialogue or the delivery of it. Nathan Fillion was excellent except for the insipid conversations they had him have with a pair of animated snakes. Anthony Stewart Head was rehashing generic dialogue about prophesies that could have been pulled from any of a hundred episodes of Buffy. When we got home around midnight, the cat had not left the big pillow she'd parked herself on before we left. Good choice.
Posted by Gerald Saul at 11:30 PM