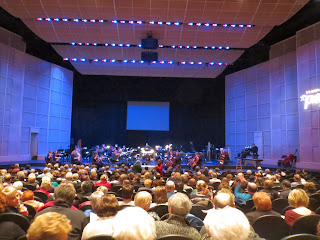 After twenty years of regretting being unable to afford going to Chaplin's City Lights with the Toronto Symphony, this evening I finally saw a Charlie Chaplin film with live accompaniment of his original score. The performance was wonderful. While often off by a few seconds this way or that, it was incredible to hear. I had a couple of good conversations; first with Kyle before the show (image below) and then I ran into Berny Hi and Chrystene Ells during intermission. Of course, with Berny and Chrystene, we talked about how much better it would have been with the Filmpool's kick ass new Christie projector instead of whatever lame small projection they used both tonight and for The General the last time we attended. I'm surprised they don't take a page from Saskatoon and put a bit more showmanship and spectacle into this thing. It still feels like a day at the symphony where a movie just happens to be running at the same time.

I also found out that the student rate to attend, contrary to the website's claim of $35, is only $7 if you book directly through the box office. Had I known, I'd have directed every available film student to attend.
Posted by Gerald Saul at 11:08 PM