I had a Filmpool Board meeting at noon today. We have been doing Sunday meetings because most of us are available and the parking is generally easy. However, as I mentioned in a prior post, preparation for the Grey Cup has led to hundreds of parking spots being removed, even on Sunday. I came down early to get a spot (got one a few blocks away) and took the extra time I had to explore the Bay for a new popcorn machine (the one that was suggested is not good, it is one of those self stirring machines that invariably jams with kernels and burns the whole mess). While in the Bay, I overheard one woman, walking with a winter coat on, commenting sarcastically that there was no air conditioning in the store (fortunately her teenage daughter was there to mock her). Another woman was beside herself upon finding out that the mall would not be open until noon (the Bay is open earlier) so she could not get to Tim Horton's. Yet another woman I was walking behind was complaining that the police officers who had just walked past, whom she was told were just around to make people feel safe, were actually watching her, along with the hidden cameras, and that she had great issue with this. 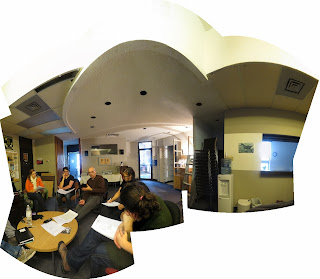 I started taking this picture series during the Board meeting to document the current ceiling which will be replaced due to damage earlier this summer. The renovation has been very slow, with only Gord at the Filmpool the only one trying to crack the whip on the other parties. Fingers crossed that it will get done in February.
Posted by Gerald Saul at 5:01 PM

Gerald…save yourself the trouble time and money from buying yet another 'thing' to make popcorn in. The broken one is just fine…I have the same kind and it is broken too. You just have to use the right heat and shake the pot regularly. And if it does burn a wee bit on the bottom…well, no problem really… it is the popcorn maker and the pot I am not worried about burnt stuff on the bottom. Just use a scratch pad to get out the worst.
Marsha