William excited about the big game this afternoon....? 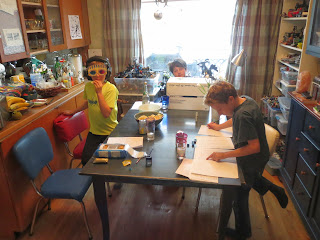 William has been excited all week for this afternoon's big game .... his role playing game. He invited a couple of friends over and has had some ideas for a session that he would run as game master, taking on this role for the first time. From the sounds of it, there is nothing but anarchy. Apparently, the players are behaving like he thought they would.
Posted by Gerald Saul at 4:26 PM