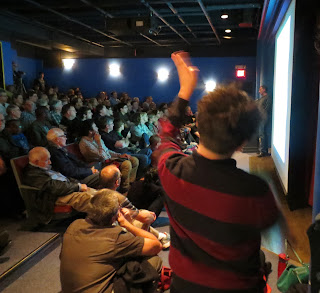 I thought that we would be joining a small gathering of science-interested people for a modest talk at the Saskatchewan Science Centre last night, but I began wondering as William and followed a line of cars into the nearly full parking lot, if I my interpretation of what the city's intelligentsia does on a Friday night was accurate. When we got to the lecture hall ten minutes before the talk was to begin, we realized that we had better be quick to sit down on one of the few remaining stairs, the last spaces where a human could fit in the room. The 125 seat space had in excess of 150 people crammed in, so even though my spine compressed in a way I don't want to repeat ever again, it was well worth it. The lecture was both informative and entertaining. Dr. Rice is a geologist who has worked on most of the Mars missions and brought dozens of facts, opinions, and anecdotes to the audience. William had multiple questions at the end, eventually earning him the nickname "The Mars Kid". One of William's final questions, of whether or not people or robots should be used to build a station on the moon for colonization? Rice turned the discussion to the idea that the first to build in any place are the ones to establish the cultural basis there.